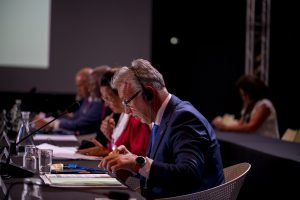 The Conference of Presidents of Outermost regions is the main political and technical cooperation body between the Presidents of Azores, Canary Islands, Guadeloupe, Guyana, Madeira, Martinique, Mayotte, Reunion and Saint-Martin.

The conference defines the orientations of their cooperation, whose main objectives are to:

The presidency of the Conference is a rotating one, with a mandate of at least one year. It meets in ordinary session, at least once a year, in the region holding the presidency and adopts its conclusions in the form of a final declaration in which the common political positions of the outermost regions are reflected.